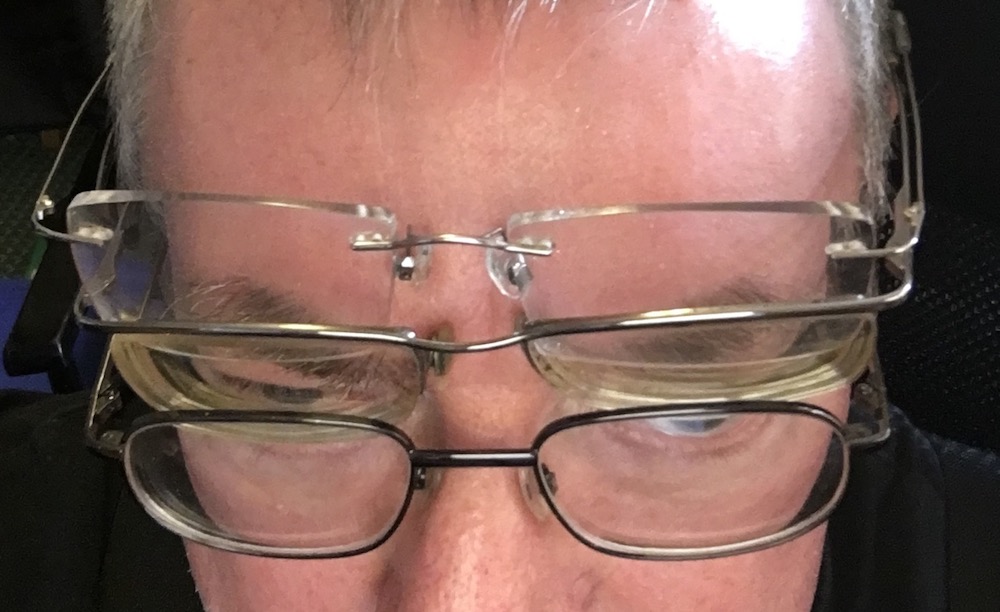 Sixty may be the new 50, but once you reach a certain age it seems the body has an in-built coping mechanism for a variety of afflictions that you don’t remember troubling you in the past.  I’m being cautious here in case others suggest that an even bigger problem is the failing memory, which is why, when it works properly, the mechanism I refer to  should protect you from such accusations.

Let me give you an example.  You wake up after a rather pleasant evening with friends and your partner says:  “How are you today?”.  You don’t reply that you feel terrible, that, you have doubts that you will last the day or, that having reached a certain age you should perhaps go a little easier on the socialising.

No you smile broadly, and say you are absolutely fine; could not be better in fact, and then slope off to the garden shed to hide away until teatime.

Over the last few days my coping mechanism has been running at full speed.   I’ve been wandering about the house, rifling through drawers,  opening and shutting cupboards and repeatedly checking the pockets of my coats hanging in the hall.   (Why do I have so many coats?).   Asked what I’m looking for I reply with a nonchalance that I don’t actually feel:  “Oh, nothing important, don’t worry.”   At the same time my mechanism respectfully suggests that my searches should take place late at night when no one else is about.

You see the problem is I’ve lost my spare glasses and I need them for a forthcoming holiday.  I don’t actually need them, I just want them in case I lose or break my normal spectacles, a thing that has never, ever happened in the past while I’ve been away, but, well, you never know do you?

It is as if my coping kit doesn’t want it known why I’m stalking around the house poking into every mouse-hole, fearing this would give others the chance to comment, probably unfavourably on my advancing years.

As I write I still haven’t found the missing specs, but as with every cloud there is a silver lining.   I’ve discovered the pack of mini-luggage labels I’ve been trying to find for for ages (I need these to mark the dozens of spare keys we seem to have accumulated, but which languish anonymously in a very old tin).  I have also uncovered in the search:  the continental power plug adapter missing for over a year and already replaced (now we have two) and a small plastic bag containing Euro coinage, which as it turns out will also come in handy very shortly.

Other finds include a 1963 do-it-yourself Gardening Annual (that will make for interesting reading on a rainy day) and a Beatles EP “All my loving” – I hadn’t lost either of these, but simply forgotten they existed.

Oh, and at least four previously prescribed pairs of specs have turned up too – one of these appeared in a photograph I had taken in 1993 and it really does look as though I should have gone to…….

I read this morning that a lucky lady from Shipley has just won £14.5 million pounds on the National Lottery and after a luxury weekend in Harrogate paid for with money she had to borrow pending the pay-out, her first action was to pack a few bits and bobs and move out of her council house.  Most of her belongings appear to have been dumped outside to be picked over by neighbours.

Assuming the press reports are not alternative facts, Beverley Doran has cancelled her state benefits and moved into an hotel pending the purchase of a “posh” house.

The story had some resonance in our household because Mrs P and I have just “come up” on the Premium Bonds.   Her win was £25 which caused much excitement and from me much grumbling because in the all the years I have had bonds, I haven’t won a bean.  And this was her second windfall.

I admit I should have been pleased for her, but instead retired to the spare bedroom which doubles as my study and fumbled through the many drawers in search of my premium bond holder number.    I’ve already set up automatic e-mail notification of any wins, so it was a slightly pointless exercise to type the number into the unclaimed prizes box on the National Savings website, but I did it anyway.

What?  I’ve got unclaimed prizes?   Not prize, prizes!  Not one, but TWO £25 prizes.  With inappropriate smugness I publicised the news in my usual style by yelling down the stairs.

Further investigation, which because of the necessary, but seemingly over the top security measures, took two days, revealed that when we moved house over five years ago I hadn’t bothered to tell NS&I and as a result they send my dosh to my old house.

I’m in the process of collecting, but first I have to create an online account, and then write to explain the change of address so I won’t be in the money anytime soon.

This morning’s Lottery news made me think though; it wasn’t many years ago when our joint win (yes I will share it) would have been a really big deal.  I don’t want to sound ancient, so a comparison with the year 2000: in that year you could have used the £75 to buy 120 tins of baked beans (more if you opted for an own label brand).   If I nip to the shops tomorrow, I will only get 60 tins!*

However the point of my story requires me to go back much further in time to the late 1960s when I was working as a reporter on the weekly newspaper in Whitby, in North Yorkshire.  The office took a call from the Yorkshire Evening Post asking if someone could nip round to see a lady who lived in the town and tell her she had won their Spot the Ball competition.

As I was the junior I was despatched to do what I imagined would be a rather nice job. On the walk I mulled over how best to do it.   The £1,000 prize was a lot of money – in those days if you earned £1,000 a year you were considered to be rather successful.   A tradesman at that time was doing well to earn £12 a week.  Should I simply blurt out the news on the doorstep, or be subtler and get myself inside so that the lucky lady could be sitting down when I broke the good tidings.

I rang the doorbell, a lady answered it and as she didn’t look particularly cheerful I choose the doorstep option.

“Hello, I’m from the Yorkshire Evening Post'” I said assuming she would twig that it must be to do with the competition she had entered (and pleased with the exalted status I had awarded myself).    “Yes,” she said, still expressionless and with a tone that required me to continue.    “I’ve been sent round to tell you, you have won the ‘Spot the ball’ competition and a prize of £1,000.”

At that the lady burst into tears, not ordinary tears, but uncontrolled sobbing.  I was only in my late teens and not used to dealing with such situations so all I could think of was suggesting I go in and make her some tea.

It turned out that the lady’s husband had died quite recently and her tears were more about that than the joy of winning the cash.   She chatted for ages about him explaining that life had been tough and this cash would have made all the difference to their lives had he still been around.

Maybe there’s a message here for the Lottery people; even taking inflation into account, it doesn’t take £14.5 million to change people’s lives.

*http://static.rasset.ie/documents/news/cai-supermarket-basket-survey.pdf Updated by me to 2017 product price.

I’ve finally retired.   Well that’s the official story.  I’ve actually retained some clients but my workload has been reduced by 90% leaving me lots of free time to do all those things I’ve always said I wanted to do….spend more time boating, touring with the new caravan, gardening, walking and…….

The first couple of months, while not the worst winter months I’ve ever experienced, don’t seem to have been conducive to do more than tidy my office.  Although I’ve created a landfill site worth of paper shreddings, I still have a landfill of files and it is those files that have been my undoing.

The dog has had to cross his legs while I sat wondering at the memorabilia I’ve collected over the years: newspaper clippings of stories covered long ago, photographs, tapes, and CDs of once loved radio productions;  event programmes, award certificates, each of them adding piece to the jigsaw of the life of DTP.

Mrs P has started to hide when I shout the words “just look at this” and I’m sure my facebook friends are tired of my avalanche of postings.

And then there’s this, the new website.   Why?  Because I can is probably the only answer I can offer.  I deny it’s simply an online brag.  I just wanted to share some of the things I’ve done and seen and, hopefully, am still to do and see, with anyone who was interested.

So please do have a look around,  hopefully there is enough information for you you to enjoy what you find but don’t be shy about contacting me if you have any questions or wonder “just where is that place”.