The Coast to Coast is by far the most challenging walk I’ve undertaken: 192-miles on unofficial and mostly un-signposted footpaths from St Bees’ Head, on the Cumbrian coast to Robin Hood’s Bay, in North Yorkshire.   The route crossed the Yorkshire Moors,  Yorkshire Dales and Lake District national parks and because the prevailing wind is from West to East, most walkers travel in that direction, keeping the wind behind them.

But this means tackling the mountains of the Lake District first, and as I hadn’t really trained sufficiently I decided to walk the other way, my logic being that the Yorkshire Moors are easier walking and would prepare me for the more difficult terrain of the Dales which in turn would see me fit for the Cumbrian mountains.

I booked a luggage carrying firm to move two weeks worth of clothing from hotel to hotel (or Youth Hostel) and set off from Robin Hood’s Bay, with my son for company, having first dipped my boots in a stormy North Sea.

I should say now that I’m not planning to write hundreds of words itemising every incident on the walk, there are lots of other websites where you can find chapter and verse on the detail of the route, which was the dream-child of a famous walker, writer, and illustrator, Alfred (A.W) Wainwright.  Try www.wainwright.org

So the bare bones then as a reason to show you the photographs, all of which were taken on a half-frame Olympus compact camera as transparencies and later transferred to the digital format.   There is some loss of quality.

Day 1 took us from Robin Hood’s Bay to Grosmont, (home of the North Yorkshire Moors Railway) passing the Falling Foss Waterfall, in the woods between Maybecks and Littlebeck.   The first half of the day was pretty wretched with pouring rain and very muddy footpaths.  But conditions cleared and spirits lifted after a sandwich lunch.

The weather on day two was much kinder, well it was dry and slightly warmer, as we may our way from Grosmont to the highest point on the North Yorkshire Moors,  the Lion Inn, at Blakey Ridge, for the next overnight.   The route took us through Glaisdale, and Beggar’s Bridge, supposedly built in 1619 by a poor man who became rich, and returned to marry his sweetheart.  Beggar’s Bridge

The easy walking of the beautiful Esk Valley soon gave way to the harsh moorland as we began the long climb to Blakey Ridge, stopping only for an occasional photograph of the stunning scenery.

The next two days took me off the moors to the Vale of York and what some say is the dullest:  17 miles of tarmac road to reach the end of the Yorkshire Dales.    Dull walking maybe, but still some pretty views, and after a misty start on the moor tops, the weather was good.   It was now solo,  Daniel had other things to do.

And so at the end of the fourth day I reached Bolton-on-Swale, a  pretty village a couple of hours walk from the market town of Richmond.

In Richmond I was joined by Paul Phillipson for the remaining, toughest section of the walk, across the Yorkshire Dales and the Lake District National Park.  From Richmond our first stop was Reeth, a pretty Dales village set in a valley.  Easier walking and an arrival in time to sample some beer.  The Black Bull Hotel is much visited but the highlight was the grumpy looking terrier in the bar. We were told not to look at him and we would be ok!   Apart from the food and the beer, the view from the window was much appreciated. 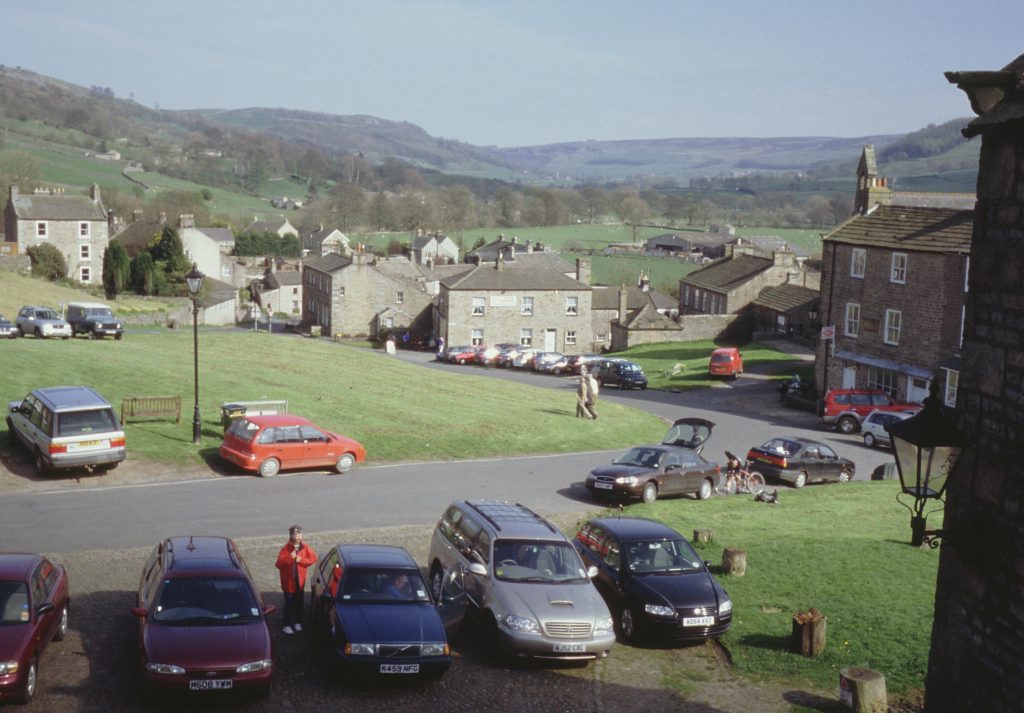 Morning saw us start what for me was the sixth day of walking, and took us through Swaledale to Keld past ancient lead mining workings, across swollen streams and along slippy little defined footpaths.   A memorable walk nevertheless in glorious May sunshine. 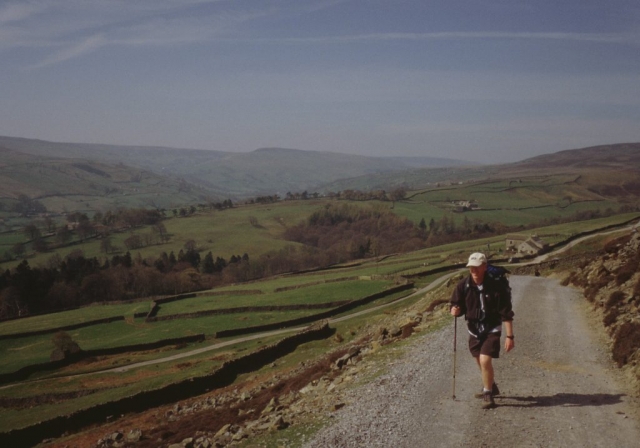 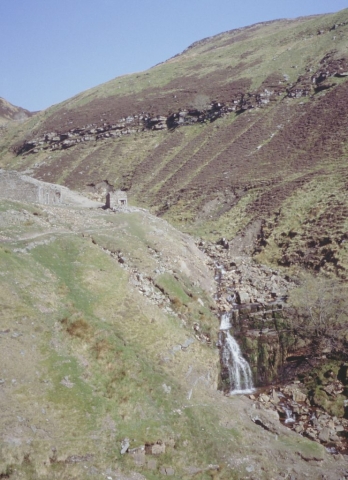 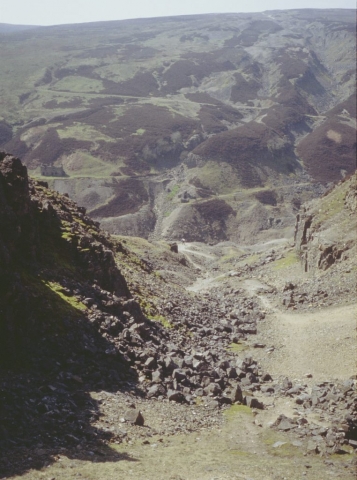 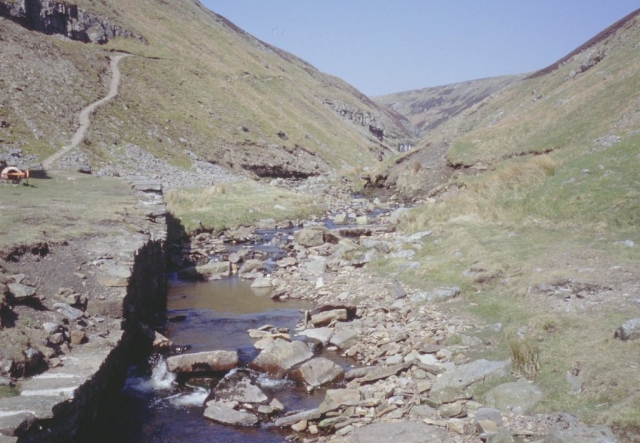 After an early hiccough when the luggage porter did not arrive with my change of clothing, the system was working well.  In theory this enabled us to walk with backpacks much reduced in weight.   Nevertheless, an emergency bivvi bag,  waterproofs, warm jumper, spare socks, lunch, water, maps and camera still weighed heavily on our shoulders.  We were full of admiration for the people we met who not only carried everything for their personal needs but tent, sleeping bag, cooking stove and food as well.

The next section took us over the moors to Cumbria and Kirkby Stephen for another overnight stop and then on to the town of Shap, crossing the M6 motorway in the process.

As a result of the 21 mile hike the previous day (or the beer perhaps) we started the next leg to Patterdale Youth Hostal rather tired but late morning reached Lakeland proper.   The path along Haweswater (not a real lake but a reservoir to supply drinking water) looked level and straightforward but turned out to be the exact opposite, uneven and up and down!   We lunched at the foot of our first real challenge, Kidsty Pike, 2,850 feet;  it wasn’t that the path was difficult, smooth grass really but it appeared to go on for ever.

From Kidsty Pike you could look across the valley to one of Lakeland’s famous ridges, High Street and as we walked on towards Patterdale, we could see Angle Tarn, one of the most remote of these small lakes in the area. 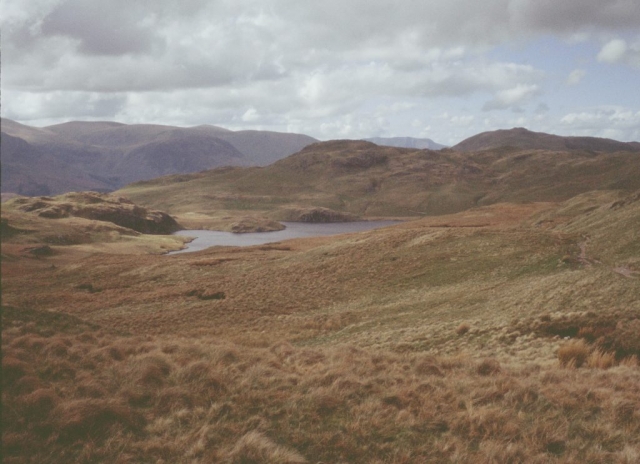 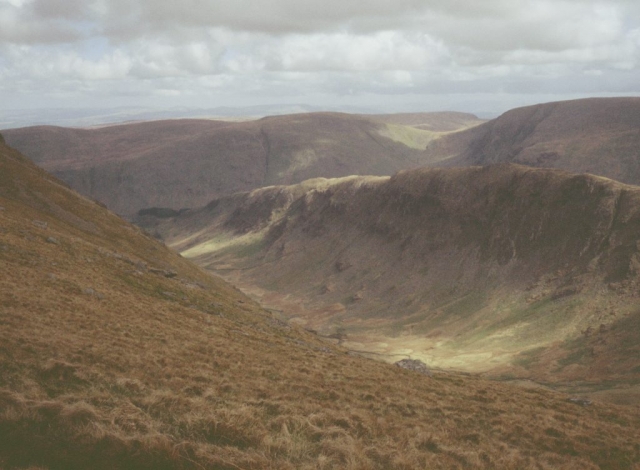 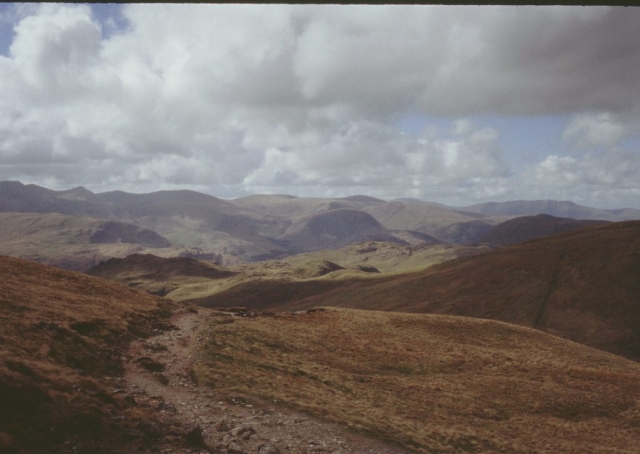 By the time we descended from the mountains to Patterdale it was so late we had missed our pre-arranged dinner at the YHA and had to add a mile or two to the day by walking to the White Lion Pub.  Such hardship.

The next leg from Patterdale to Rosthwaite was one of the toughest day’s walking I’ve had.   It rained most of the day and visibility was poorish so was abandoned the optional high level route over Sunday Crag or along Helvelly’s Striding Edge in favour of following Grizedale Beck.  However the ground was waterlogged and every step was into a puddle, or worse a torrent of running water. 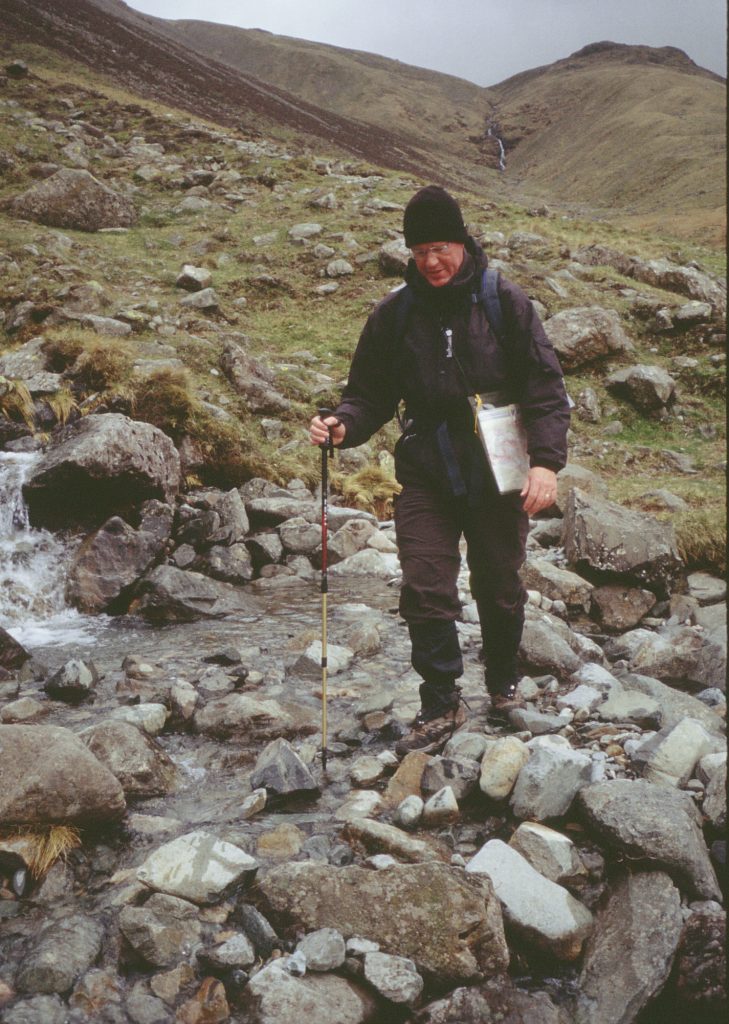 We were exhausted by the time we reached Thorney Hill YHA and had our picnic lunch sheltering in their porch (hostels tend to be closed during the day).   We were glad we had spare T shirts and pants and did a quick public change.  You could actually wring water out of the T shirts. 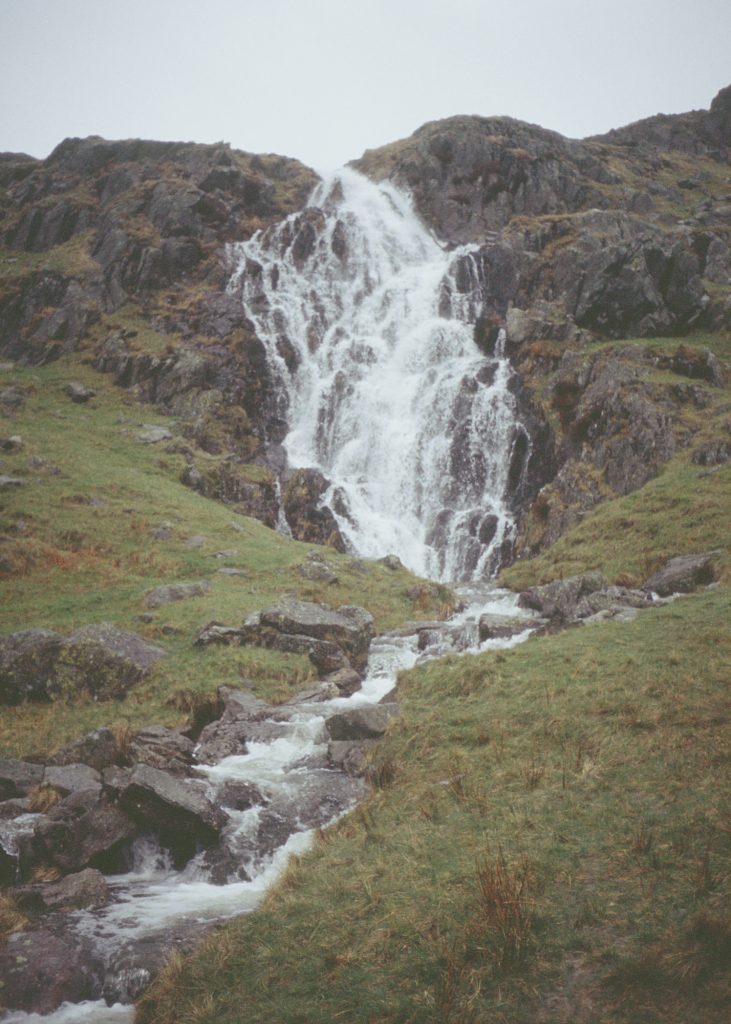 Things didn’t get any better after lunch.   Somehow we got lost on Grasmere Common.   The paths were slightly indistinct and in the matter of navigators who were too tired to function, we ignored the Sat Nav claiming “it must be broken” and set off in the wrong direction.   Fortunately before we reached a rather frightening drop, we back tracked and found our route.  The final section to Rosthwaite took us past Lining Crag where the rain had been so heavy we had to scramble down the rocky screen on our backsides.

Our kit was still wet as we started the last but one section from Rosthwaite YHA to the hostel at Ennerdale, a mere nine mile totter.   The day was sunny and apart from the stiff climb from Honister onto Grey Knotts it was a pleasurable walk past Black Sail Hut, one of the most isolated Youth Hostels in the country.   It was empty, but the door was open and we were able to boil a kettle and make tea.

We dawdled to Ennerdale YHA and, as the only occupants, enjoyed the undivided attention of the wardens.  This was fortunate as I fell in the shower and badly bruised my foot which meant for a painful final days walking.

The last day was again bright and sunny and a 24 mile route march to meet our transport back home.    Highlights, apart from the pace, included the muddiest farmyard known to man – four inches of thin mud which meant walking on tip-toe to avoid getting soggy feet (again).

We WERE tired as we walked down the cliff path into St Bees Head but I still had to get to the beach to dip my toes in the water: it might have been a step too far, but afterwards we adjourned to the pub for a very, very welcome rehydration session.