A miscellany of words and pictures from the pen and camera of David Peel
The Carter-Peel walking group headed for the Scottish borders for the 2019 annual trek and a varied, 70 plus mile, jaunt named after Cuthbert, a 7th-century saint.   He began his religious life where the walk begins,  Melrose Abbey, and ended it where he was first buried on Holy Island, our finishing point.

It seems that during his life Cuthbert achieved the rank of Bishop but was made a saint when his coffin was opened some eleven years after his death and his remains were found to be perfectly preserved.

Religious beliefs were not in our minds as we planned the holiday but we frequently met walkers for whom there was great spiritual significance in the trail, and who saw themselves as pilgrims.

A surprising feature of the route is that although it passes through some pretty remote countryside, and the walking is arguably less demanding, some long days were needed to make best use of the accommodation that is available.
The Stages
Monday: Melrose to Harestanes 16 miles – ascent 1,264 feet (includes an additional mile or two to the nearest bus stop for the journey into Jedburgh.)

Tuesday: Harestanes to Morebattle 12 miles – ascent 928 feet.
Wednesday: Morebattle to Kirk Yetholm 7 miles – ascent 979 feet.
Thursday: Kirk Yetholm to Wooler 14 miles – ascent 1,774 feet.
Friday: Wooler to Beal 17 miles – ascent 1,056 feet.
Saturday: Beal to Holy Island 6 miles – ascent 69 feet.
Day 1
Grey skies and the forecast of rain didn’t surprise us as we headed out of Melrose, but were a disappointment after a rather glorious weekend.  We had landed in the Scottish border town during their annual book festival and were impressed by the scale of this obviously important literary event.
Even the hello at our guest house was impressive.   Ushering us into her home, our host apologised that the hallway was a little dark and reached for the light switch.   With a bang, the overhead light bulb exploded into hundreds of tiny pieces showering with a potentially lethal confetti of welcome.
Breakfast the next day was amazing (we thought this was to make up for the disastrous start to our visit) but it was still amazing when we returned for a final night a week later before our journey home.

The walk begins with a bit of a haul, the ascent of the Eilden Hills, three peaks that dominate the skyline for miles around. In fact it was almost the last day before we lost sight of them.  Fortunately we passed over the saddle, but still a stiff climb in strong winds and the only rain of the week.  It was one of those occasions when having stopped to don waterproofs we had to shed them not long afterwards as the sun forced its head through the clouds.
The descent was through woodland and the walk continued through field and valley to reach the banks of the River Tweed and on into St Boswells.  As it was Monday the recommended bookshop with cafe was closed, but we found that walkers were looked after admirably at St Boswells Golf Club (cup of tea £1).
Continuing along the River Tweed the route took us to the Roman Road, Dere Street, and eventually the Harestones Outdoor Centre.  Many walkers had arranged a taxi from here into Jedburgh, but a walk along the main road to Lanton allowed us to catch a bus.

One of the great things about this walk was the people we met. Our constant travelling companions (or so it seemed) were Jesse and Hope Suber, Americans, who told us they regularly come to the UK to enjoy our long distance trails; and later we met Jenny Rankin and her friend, Meg also from America. A former church minister, Jenny was researching for a new venture, an Educational Travel Company based in Massachusetts and in the Border Hotel that night she quizzed us about the various walks we have undertaken over the years. They did consider the walk a pilgrimage.

A taxi back to Harestones put us back on route and soon we were enjoying the sunshine and views on the  banks of the River Teviot, passing Monteviot House on the way.   The suspension bridge across the water actually wobbled as we walked but the setting was too good to miss a photo opportunity.  The stroll along the river was fabulous but all too soon we were onto quiet metalled roads which made up much of the rest of the day to Morebattle. 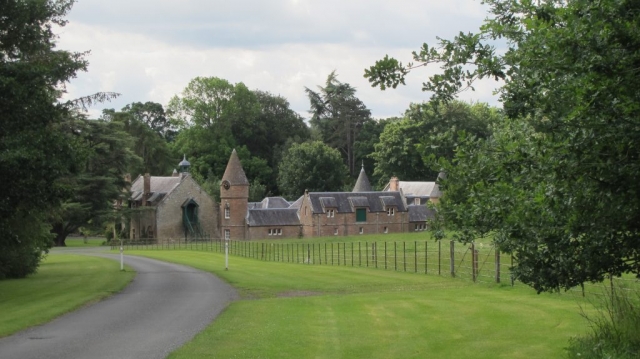 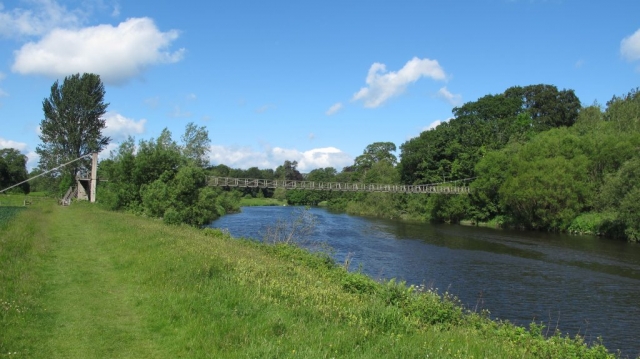 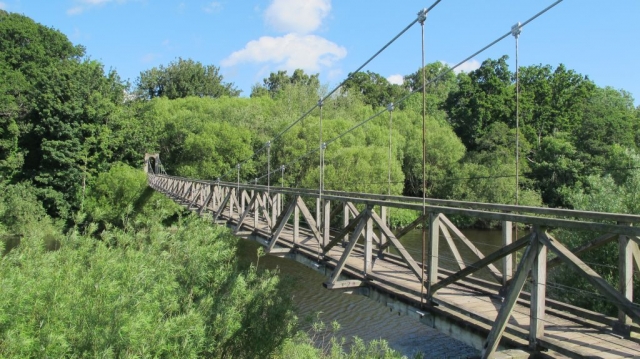 And now the real hills begin.  The Cheviots! Grubbit Law, 326 metres; Wideopen Hill, 368 metres dropping down slightly to Crookedshaws Hill and down into Yetholm. A short but exhilarating day with sunshine and a shower.

Wideopen Hill was an important stage on the journey.  Not only is it the highest point along the route but is also half way between Melrose and Holy Island.  Time for more photography:

The weather remained kind for much of the rest of this relatively short day though as we headed down from the hills towards Kirk Yetholm a short sharp shower reminded us how changeable things can be on higher ground. That said the sun shone as we reached the village pub, The Border Hotel, and a welcome pint (or two) before heading for our guest house.

An exciting and important day today because we crossed the border into England. Everyone warned us that the day would start with a tough climb and indeed it did. We followed the Pennine Way for the first mile or so then skirting the hill tops we quickly reached the border.

The path from there to the next point of civilisation, Hethpool, climbed and dropped, climbed and dropped until we finally were in a valley which we followed through the village before heading steeply upwards once more on the long haul to the hill tops. Jesse and Hope had been joined by English friends met on a previous trip and they soon passed us as we crossed heather covered and boggy moorland heading for Wooler. It was blowy on the tops and the path was tricky to follow in places, but as we reached a dry stone wall that marked a turn, there, sitting in the shelter were the Pilgrims Jenny and Meg enjoying scones and jam. They’d set off early having heard the day would be a tough one but were pausing for their packed lunch.

We passed Tom Tallons Crag (353 metres) and Gains Law (319 metres) before heading to Humbleton Hill and the start of the descent to Wooler. Another stiffish climb through woodland and then down to Wooler Common and the streets of the town itself.

An exciting prospect today was seeing St Cuthbert’s Cave, where, legend has it, the holy man lived for a time before reaching Holy Island and of course sight of the sea itself.

Walking holidays are often about the people you meet en-route and as we strolled through Wooller noticed some rather huge brown and white dogs standing with their feet on a garden gate. Chatting to the lady there it transpired they were hunting hounds from the local hunt and she, like her father before her was a puppy walker. That is she took the puppies and treated them as pets for the first six months of their life. She explained that the main aim was to get them used to humans (particularly children) so that once in the pack there was no risk they would by mistake chase a human instead of a fox (though nowadays the law says it should be a trail laid for them). She was very proud of her dogs and they had even won her prizes in the local show.

We quickly left Wooler behind climbing up onto Weetwood Moor before dropping down to the River Till and an amazing 16th Century bridge near Weetwood Hall. The bridge is a Grade I listed structure. It is thought probable that the English army, commanded by the Earl of Surrey, crossed the River here on the way to Barmoor Castle on the 8th September 1513, the day before the Battle of Flodden.

However the star of the show was the enormous “Scottish” thistle growing on the road side just round the corner. Ironic that the first one we see is actually in Northumberland. But as keen gardeners we had to inspect and photograph the specimen. 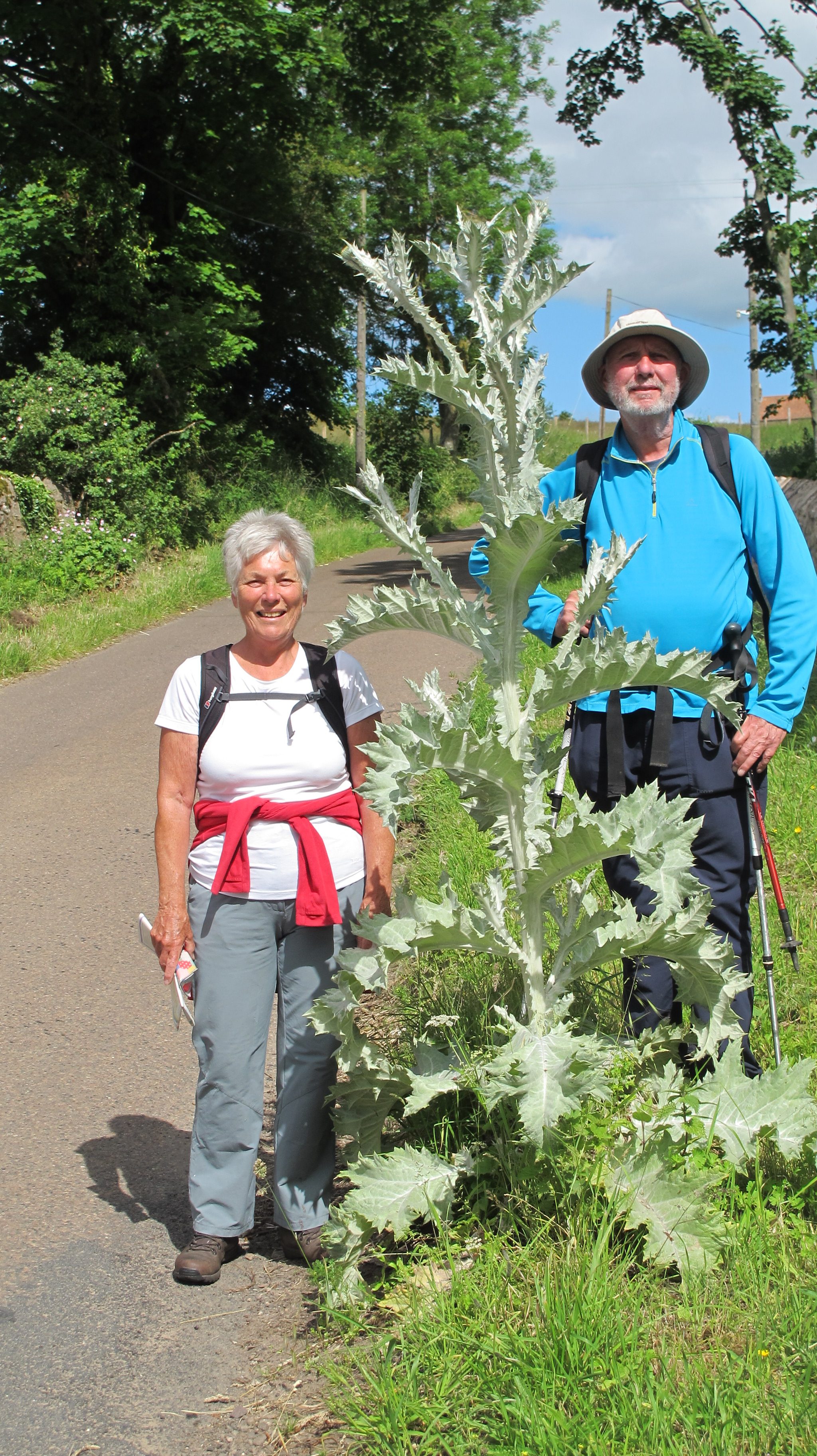 Our next surprise wasn’t long in coming….an hour or so later we chanced upon a field of poppies, not the famous red wild poppies, the symbol of remembrance, but clearly a crop. We speculated that this Northumberland farmer might be secretly harvesting opium, but concluded someone has to grow the poppy seeds you see sprinkled on bread buns. Or perhaps the seeds are processed for their oil. Wikipedia says all these are an option but you can read more here Poppies as a crop 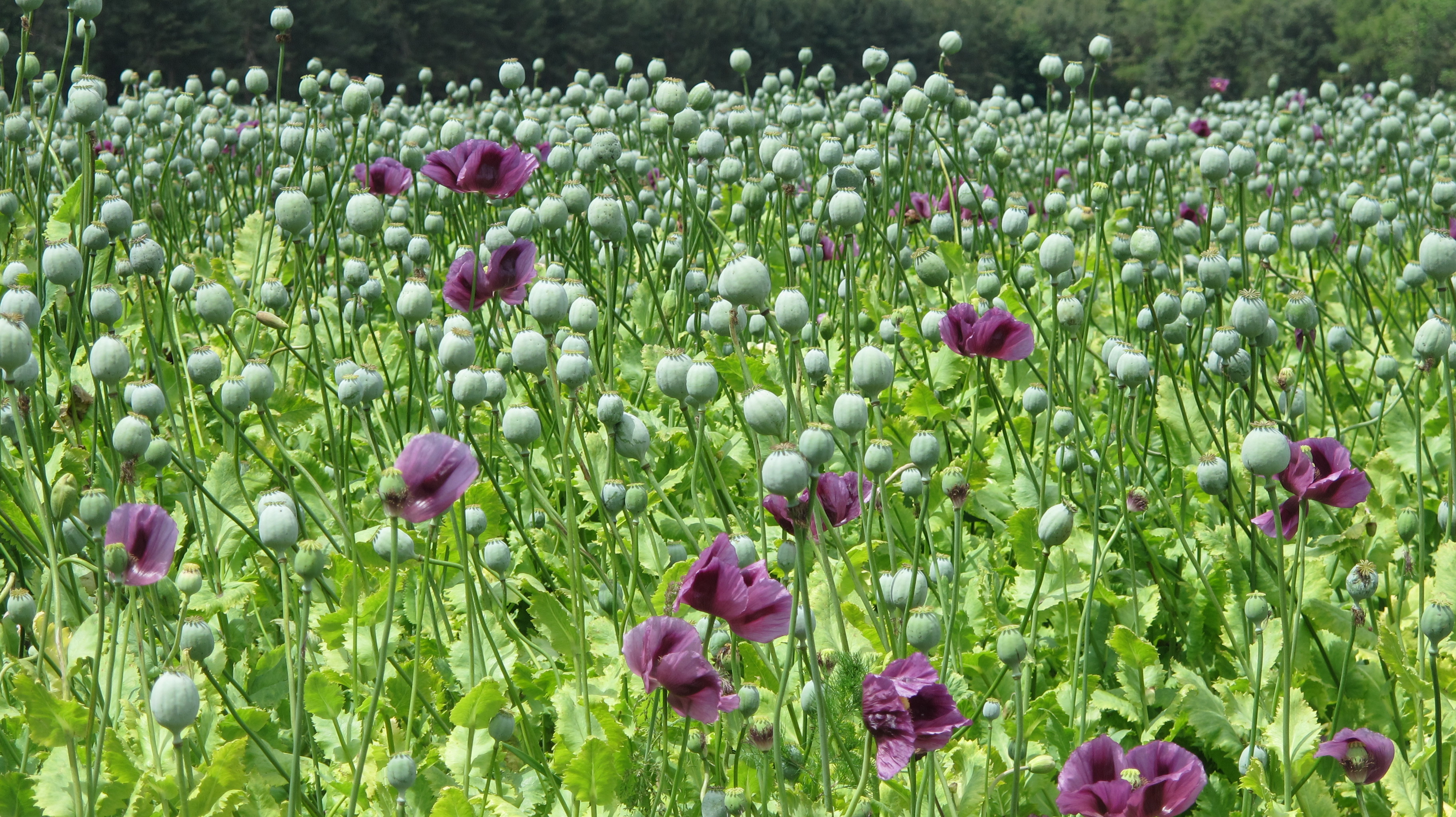 The landscape had changed now with far gentler hills dotted with farms and woodland. After skirting the bottom of Dancing Green Hill and the wooded Cockenheugh hill was found St Cuthbert’s Cave. More an overhanging rock really but it would clearly provide shelter from the wind and rain. 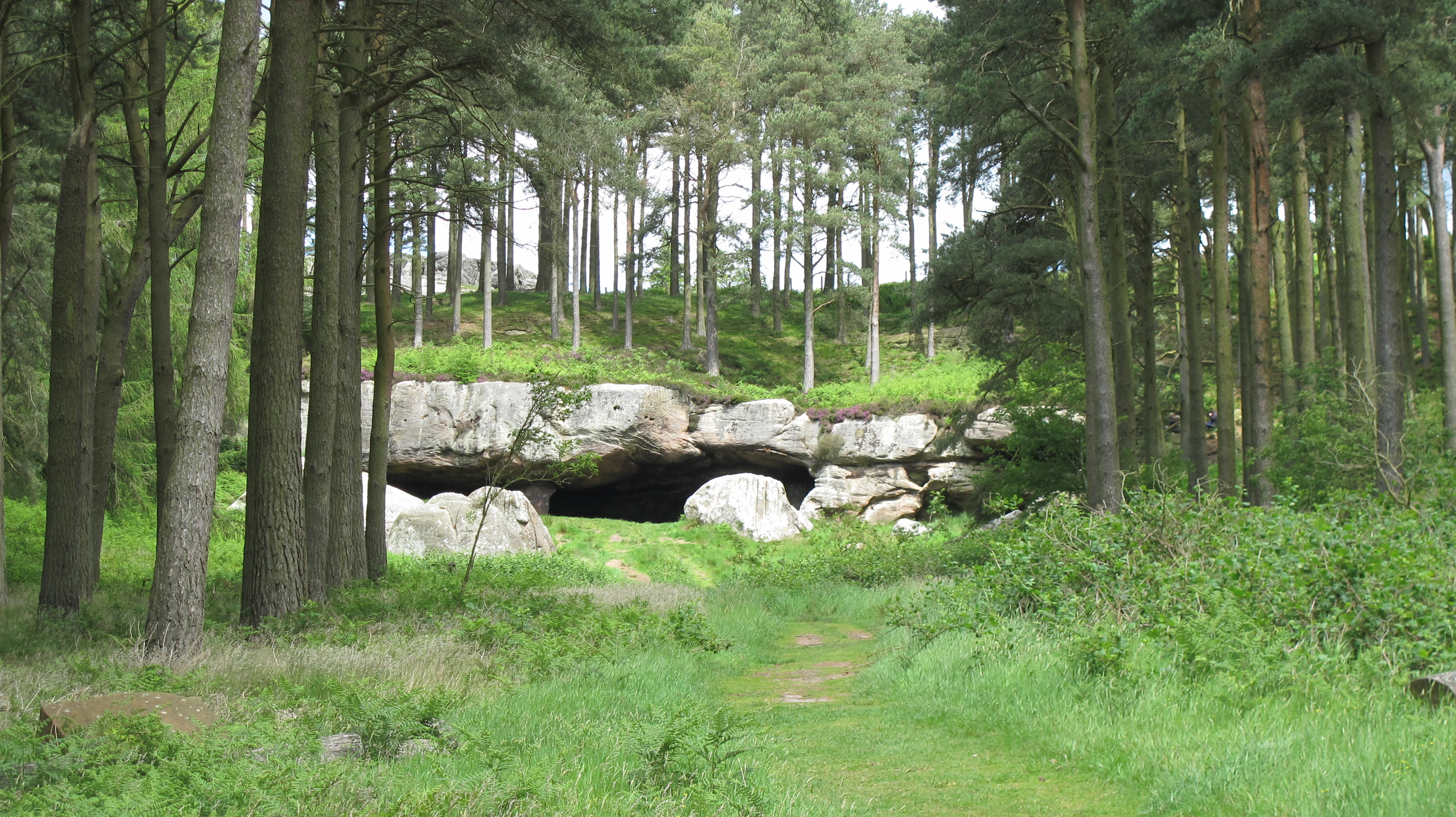 More woodland walking took us to Fenwick and our first sighting of the sea, and in the distance, Holy Island. The path crosses both the A1 (watch out for the traffic) and then the main East Coast Railway where high speed trains regularly travel the journey from London Kings Cross to Edinburgh Waverley. It’s a wonderful journey and the only part of the East Coast line that comes so close to the sea, but crossing it on foot is an experience.

First you have to telephone the signalbox from a phone placed on the crossing and are asked how many are in your party and how long will it take you to cross. In our case we assumed it safe because we’d just watched train fly by. But, no, we were told another was due any second and we should call back when it had passed. We did, were given the all clear to continue our journey to Beal. Unfortunately, as it turned out our hotel wasn’t actually in Beal, but next to the A1 which added an unexpected two miles to our walk that day (and the next). Thanks heavens for the caravan site bar which allowed us to refresh before that final extra trek.

We did try and cheat slightly and catch a bus from the hotel back to the landward end of the Holy Island Causeway but St Cuthbert wasn’t having any of it. The bus on the timetable never turned up. The timing was also wrong for us to do the pilgrim thing and walk barefoot across the muddy sand – as long as the tide is right, it is perfectly safe if you follow the prominent markers.

Instead we marched the tarmac among a caterpillar of walkers (including our friends from Florida) heading for Lindisfarne. After such beautiful scenery and footpaths soft underfoot, it was a bit of an anti-climax, something that had to be done, and eventually we reached our destination, which by now as packed with summer tourists. 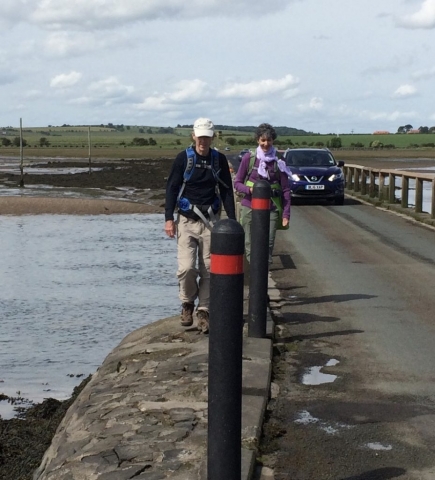 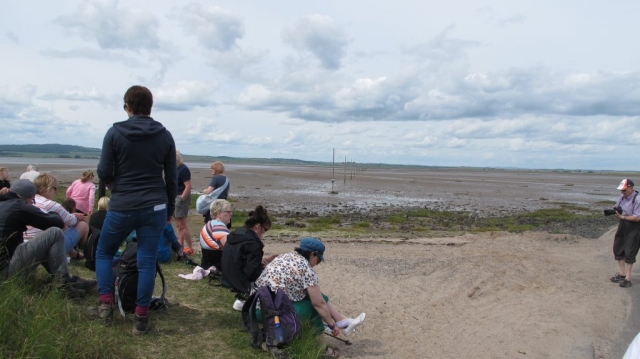 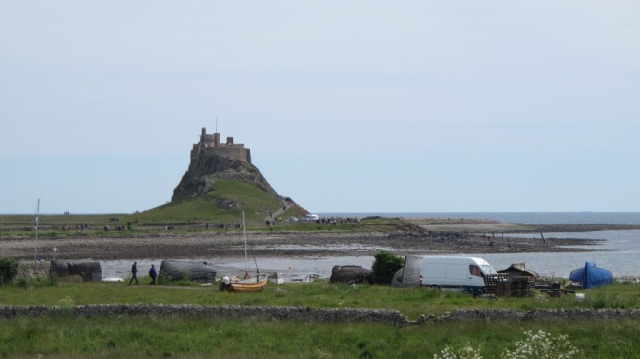 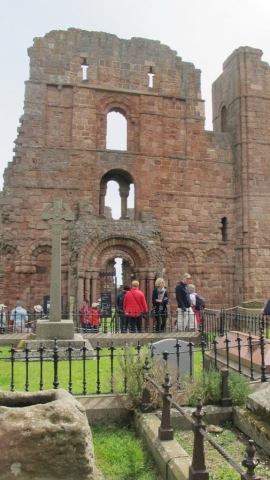 Where did we stay:

Beal (two miles away alongside the A1) – Lindisfarne Inn, Beal enquiries@lindisfarneinn.co.uk (adequate)

Luggage: We used The Sherpa Van Project to transfer our luggage from each overnight stop to the next but they contracted out to a local firm. There are other alternatives and you may even find using local taxis is cheaper.